Save your developers time

Recently, we did a lot of user interviews. We found that a lot of people in the industry are biased into thinking of how to save developers time. We have figured out - Portainer brings the value in saving developers time.

Furthermore, we believe that people's time is more expensive than tools. In any process, people should be doing a more creative, innovational work, instead of boring routine which must be put onto machines. 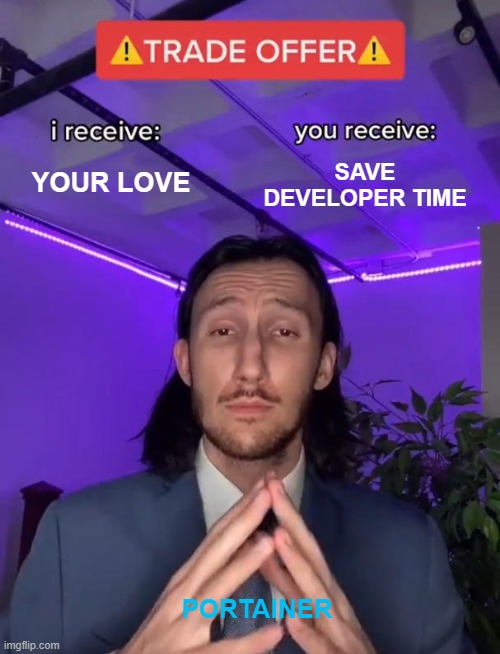 The drawback is that people can do anything, but tools are limited. Humans are naturally capable of doing a much wider spectrum of tasks, while tools functionality is stale. However, to enable people to do anything is an investment into educating them, making sure that they understand the underlying concepts and are able to draw meaningful decisions.

It’s awesome if your developers are now able to do anything on their own, but in most cases it’s not like that. In most cases, developers have also limited knowledge and willingness to learn, thus a leadership team should seek for easier, more optimal solution. That solution is Portainer in Docker / Swarm / Kube oriented space.

Portainer tackles some complexity of distributed systems operations, which enables more people to work with that technology. Portainer enables people to take that journey into containers and orchestration.

Picking the right development tools is an essential step in unlocking maximum productivity potential. And this is exactly our mission - to build the right tooling for the bloody complicated world of Docker and Kubernetes.

If you want to become an expert in using Portainer and achieving your goals in Docker & Kubernetes, check out our YouTube channel, which has multiple useful tutorials and guides.

My name is Joe, and I am the co-founder of Budibase. I have built many apps in the past, which, I guess is why I am building a ...
Start Reading
Diane Hannay February 24, 2021 1 min read

Beyond Docker - Portainer for Kubernetes, ACI/Serverless and Edge

When we launched Portainer CE in 2017, our founders, Neil Cresswell and Anthony Lapenna, set out to create a simple tool to ...
Start Reading
Tobias Mühlnikel August 26, 2022 3 min read

Wago and Portainer are happy to announce they have entered into a strategic IoT partnership agreement. Both companies are now ...
Start Reading