The round, which follows close on the heels of Portainer’s $1.2 million seed round announced in August 2020, will fund Portainer.io’s worldwide user expansion and product development, as Portainer.io charts the course for the future of container management. Portainer.io will also continue to scale and develop its enterprise offering, Portainer Business, which launched in December 2020.

Launched in 2017 as an open source tool for managing containers in the Docker Swarm environment, Portainer.io’s open source Community Edition has grown to become a popular universal container management tool with a powerful Kubernetes GUI, in addition to supporting Docker, Docker Swarm, and Azure ACI, while Portainer Business offers enterprise-level security and control for deploying containers in business-critical environments. 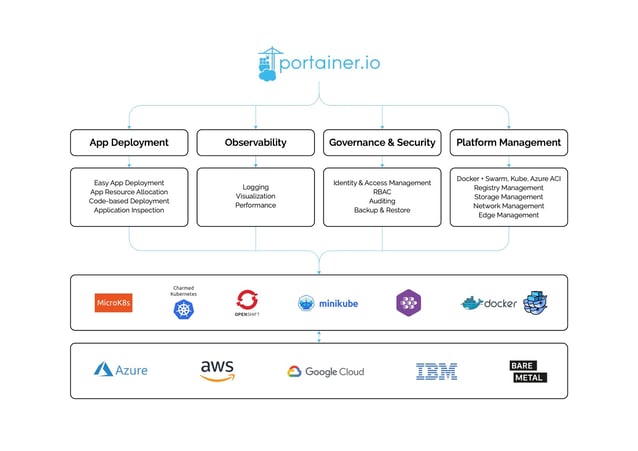 “This investment lets us double down on pivoting Portainer from a simple management dashboard, into a fully-featured, container-native application deployment and management tool. We started by adding support for Azure ACI, then added Kubernetes, and now in 2021 we plan to add support for an ever increasing number of CaaS platforms, such as AWS Fargate, Google Cloud-Run, etc. On top of this we will continue to enhance what users can do within Portainer itself, extending into the Git-Ops/Automation realm.” said Neil Cresswell, Co-Founder and CEO of Portainer.io. “Portainer is laser-focused on unleashing the power of containers for everyone, giving existing IT/Developer teams, home users, students, and beyond the tools they need to manage containers without complicated code or risky deployments.”

“Bessemer is excited to partner with Portainer to support their continued growth, and help expand their efforts to provide the most seamless and flexible container management experience for developers,'' said Mike Droesch, Partner at Bessemer Venture Partners. “Portainer’s open source community has incredibly strong engagement and global scale, which is a true testament to the value the product provides. We are excited to help them accelerate investments in their strong open source product and continue to empower more developers to leverage the benefits of containers, while abstracting away the complexity.”

“From our experience in different sectors across Europe, we’ve gotten to know how challenging it can be to manage cloud infrastructure in a fast-paced environment of shorter development cycles, increasing complexity and skills shortage,” said Benjamin Junior, Investment Manager at Sonae IM. “Portainer attracted our attention for its easy adoption, light-weight deployment and great user experience, that has supported its massive adoption from the open-source community as a whole and leading enterprise customers in the market. With the growth of edge locations and accelerated development of ever complex IoT applications, Portainer provides a mission-critical solution to abstract container management and focus developer work in application development.”

Portainer.io is unleashing the potential of containers with its universal container management tool. The New Zealand-based tool was born in 2017 from founders Neil Cresswell and Anthony Lapenna's own struggle to learn Docker, with the vision to create a GUI-based tool to manage Docker without frustration - regardless of whether it was deployed standalone, in a cluster, on-premise, at the edge or in the cloud. In August 2020, Portainer expanded to include support for Kubernetes and Azure ACI as well as retaining full support for Docker & Docker Swarm. Portainer Community Edition currently has over 500,000 global monthly users. Portainer Business, Portainer.io’s first business product, launched in December 2020 with additional capabilities and security controls for business critical environments. The team most recently raised a US$6 million Series A round in May 2021.

At Portainer, we frequently discuss DevOps culture to figure out how to equip fellow developers with the most efficient tools ...
Start Reading
Neil Cresswell, CEO June 22, 2022 2 min read

Portainer.io today announced it has closed a US$6.2 million funding round. The round, which is an extension of its Series A ...
Start Reading